This poem...it speaks to me. I copied it, by hand, into my little poetry notebook yesterday. And it was a struggle. Not because it was hard to use good penmanship, but rather because it stirs up so many emotions. Leaving a year behind is often celebrated. Resolutions and confetti stuffed down our throats and thrown in our faces. There is so much more to it than that.

I have a friend. Well, she's more than a friend. And she recently moved away. Far away. I came within an angstrom of giving her this as a going away present. But I chickened out. I give it to you, instead, with hopes that it finds its way to her.

So much of any year is flammable,
lists of vegetables, partial poems.
Orange swirling flame of days,
so little is a stone.

Where there was something and suddenly isn’t,
an absence shouts, celebrates, leaves a space.
I begin again with the smallest numbers.

Quick dance, shuffle of losses and leaves,
only the things I didn’t do
crackle after the blazing dies.

May your burnings be bright. And what's left after the blaze be your charge into a new year.

Posted by Ben Curran at 1:44 PM No comments:

Poetry Friday: For the Children

I must say, it's been an amazing summer. For many reasons. Chief amongst them, probably the fact that I've spent so many great moments with my children. I don't reflect too often on the metaphysical aspects of parenthood. What am I leaving them with? What will they remember? Just keep them happy, make memories, and teach them to be good people...those are my tenets, I suppose. And I'm ok with that.


I found a poem today by Gary Oliver and it resonates on many levels, but it definitely speaks to what I'd like my children to be able to say they learned from me someday. Oliver says it better than me, so I'll get to the poem...

"For the Children"
By Gary Oliver

Read the rest of the poem (the ending's worth it!!!) at The Writer's Almanac. If you like it as much as I do, you'll probably find yourself reading it several times.

Glad to make a return to Poetry Friday, which today is being rounded up at A Year of Reading. Check out all the other amazing posts being shared there today.
Posted by Ben Curran at 11:25 AM 6 comments:

Reflections on a Gift 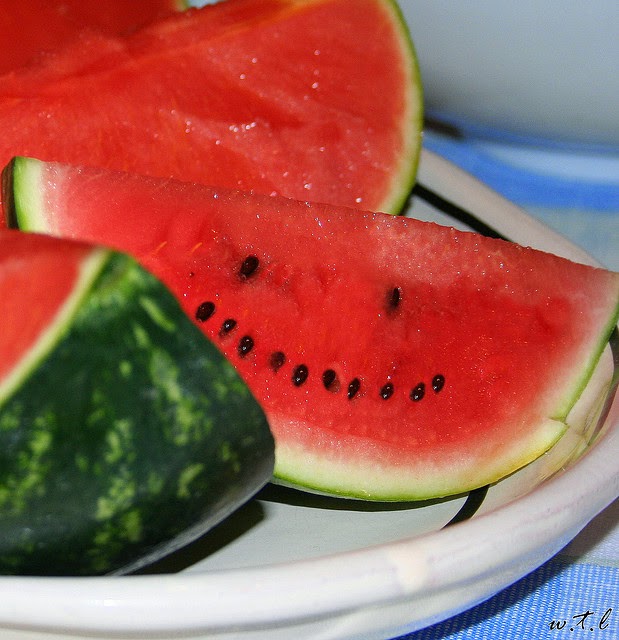 So, for reasons too numerous to list right now, I'm making some very strong efforts toward discovering happiness in life. They're going exceptionally well but, like anything in the realm of self-improvement, only time will tell. I've got plenty of cause to feel confident, though.

One thing I'm attempting to do is bring things into my life that make me happy. Poetry has always been one of these things, so it's making a return to my life rather than a debut.

It's amazing how turning to poetry can help one navigate pretty much any emotion in existence. Whether it's coping with loss, celebrating a birth, or the happiness and joys of every day life. There's a poem out there for it all.

As I find myself excited by the possibilities that life has to offer for the first time in a long time, I want to share a poem that brought me happiness today.


During that summer
When unicorns were still possible;
When the purpose of knees
Was to be skinned;
When shiny horse chestnuts
(Hollowed out
Fitted with straws
Crammed with tobacco
Stolen from butts
In family ashtrays)
Were puffed in green lizard silence
While straddling thick branches
Far above and away
From the softening effects
Of civilization;
During that summer--
Which may never have been at all;
But which has become more real
Than the one that was--
Watermelons ruled.
Thick imperial slices
Melting frigidly on sun-parched tongues
Dribbling from chins;
Leaving the best part,
The black bullet seeds,
To be spit out in rapid fire
Against the wall
Against the wind
Against each other;
And when the ammunition was spent,
There was always another bite:
It was a summer of limitless bites,
Of hungers quickly felt
And quickly forgotten
With the next careless gorging.
The bites are fewer now.
Each one is savored lingeringly,
Swallowed reluctantly.
But in a jar put up by Felicity,
The summer which maybe never was
Has been captured and preserved.
And when we unscrew the lid
And slice off a piece
And let it linger on our tongue:
Unicorns become possible again.

----
Does this make you happy, too? Something about the innocence and nostalgia. Or the imagery. Or the idea of preserving our youth. And it has a sweet ending, which you know I love. It also reminds me of one of my other all-time-favorites by Gary Soto.
I apologize for publishing this poem in its entirety. I try to be a responsible digital citizen when it comes to copyright. May the poetry gods absolve me of this sin.
So here's to happiness. And poetry. And life. I'll be back soon with more to share.

The Art of Description 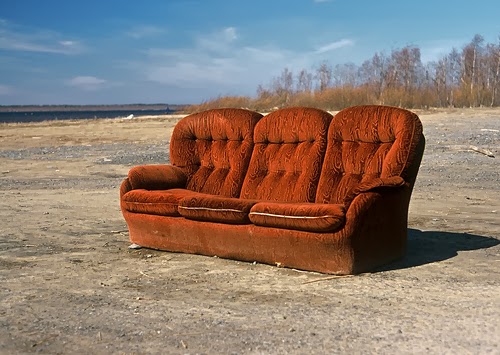 I'm amazed at the ways poets can describe things. And I love finding poets I've never heard of. I had a poem stashed in my email that fits both of these and I rediscovered it today.


Because I cannot remember my first kiss


I just love the word choice and the way he describes sitting on a couch. What I thing to describe! And I have a thing for poems whose title serves as the first line. Is that weird? Ah, poetry...

Poetry Friday: The Kick of Creation

I need to get back to blogging here. My lay-off needs to end. I think I can do it. I'll start with today.

A friend shared this quote with me as we caught up over a beer recently. It's by Kurt Vonnegut:


Nobody will stop you from creating. Do it tonight. Do it tomorrow. That is the way to make your soul grow - whether there is a market for it or not! The kick of creation is the act of creating, not anything that happens afterward. I would tell all of you watching this screen: Before you go to bed, write a four line poem. Make it as good as you can. Don't show it to anybody. Put it where nobody will find it. And you will discover that you have your reward.

I think I'll start doing that. And start blogging here more. I begin with sharing an amazing poem that came to my inbox this morning. "Time" by Chris Martin:

All that happens happens

only song will do

what an empty cave needs

that seeds to fill

one space and then that

and binding it to what, morning

by season, a crook

I see is a circling murder

that replaced the weathervane.

Read the rest of the poem here. And check out the Poetry Friday roundup at Anastasia's poetry blog.
Posted by Ben Curran at 8:45 AM 3 comments:

Poetry Friday: There's an App For That 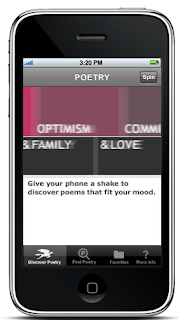 Confession time: I just got my first smartphone. Welcome to the 21st Century, right? Yes, it was about time. And yes, it didn't take me long to realize how very, very sweet having a smartphone is. Definitely embarrassed to admit how much I love it.

One of the first apps I downloaded was from The Poetry Foundation, a great app with two "wheels" to "spin". The wheels are marked with categories: humor, joy, compassion, youth, etc.   The wheels match up to create a list of poems that match the combination: Poems about Humor and Youth, Love and Joy, etc. Brilliant!

You can also search for poems by poet, poem title, subject, and mood. AND you can star your favorites for future reference. Also brilliant. If you're a smartphone user and a poetry lover, you've got to get this. Oh, and did I mention that it's free!?!? Again...brilliant.

With the app, I've found some gems that I probably wouldn't have discovered otherwise. Like this one:

Poem for Haruko
By June Jordan

I never thought I’﻿d keep a record of my pain
or happiness
like candles lighting the entire soft lace
of the air
around the full length of your hair/a shower
organized by God
in brown and auburn
undulations luminous like particles
of flame
But now I do
retrieve an afternoon of apricots
and water interspersed with cigarettes
and sand and rocks
we walked across:
How easily you held
my hand
beside the low tide
of the world

Read the rest of the poem here, or find it on the app you just downloaded! Does it make
you as happy as it makes me that the ending of it contains the phrase: "infinite
tergiversations?"

Check out how to get the Poetry Foundation Mobile app for your smartphone or tablet by clicking here.
And be sure to check out this week's Poetry Friday roundup at No Water River, a pretty nifty blog that I'm going to have to start following.
Posted by Ben Curran at 3:13 PM 6 comments:

Poetry Friday: From the Hip

Sometimes, you need a plan. You've gotta think about things before you do them. Figure out what to do first, next, and last. Obsess over the details. Try to get it all right. Set yourself up to ensure success. Whether it's a lesson you're teaching, a vacation you're planning, or figuring out how to ask somebody out. Sometimes you need a plan.

And then there's those other times. The times when you just have to go for it and say "forget about a plan."

I'd love to be more like the latter, but I have to admit that it's the former that tends to describe my M.O. most of the time.

What's my point? Not sure. But today I'm picking the first poem I see to share with you. Rebellious, I know. But you have to start somewhere.

So here's the first one I found when I did some poetry hunting today, and it's by a poet I'm not all familiar with beyond the name, Willa Cather.

by Willa Cather
Where are the loves that we have loved before
When once we are alone, and shut the door ?
No matter whose the arms that held me fast,
The arms of Darkness hold me at the last.
No matter down what primrose path I tend,
I kiss the lips of Silence in the end.
No matter on what heart I found delight,
I come again unto the breast of Night.
No matter when or how love did befall,
'Tis Loneliness that loves me best of all,
And in the end she claims me, and I know
That she will stay, though all the rest may go.
Read the rest of this poem here. Not the most uplifting choice, but it's beautifully written, and that brings me joy. I wonder how long it took to write it. How much planning and thought went into it? How many drafts? Does great poetry ever come from the hip? Maybe in the early stages, when the idea first forms? Maybe someday I'll figure it out. Until then, be sure to enjoy the rest of the Poetry Friday offerings courtesy of today's host Read, Write, Howl.
Posted by Ben Curran at 10:42 AM 4 comments:

An awesome resource for awesome schools.

Must Have Books for Teachers